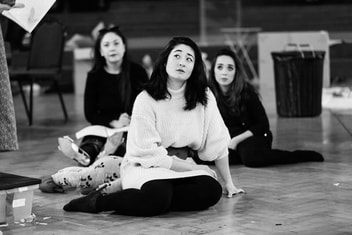 American Mezzo Soprano Jane Monari hails from Philadelphia. Jane graduated from the Juilliard School with a Bachelor of Music in voice performance with scholastic distinction. During her time at Juilliard, she was a Morse Fellow and a Teaching Assistant for Music Theory and Italian Vocal Literature.  Jane graduated from the Master of Arts programme at the Royal Academy of Music, where she received Distinction and a DipRAM. She is a graduate of the Alexander Gibson Opera School at the Royal Conservatoire of Scotland.

Jane has appeared as a soloist in concert with the City of Glasgow Chorus and the Orchestra of Scottish Opera, singing Händel’s Israel in Egypt, the Beethoven Missa Solemnis, the Mozart Requiem, and Die Erste Walpurgisnacht by Mendelssohn. Jane sang in the premiere of The Hours by Diana Burrell in  2011, and the world premiere of Elgar Howarth's Venice- A Portrait, a piece commissioned by the academy to open their  400+ series in 2012. Jane was the winner of the 2012 Ludmilla  Andrew Russian Song Prize. She has performed in masterclasses with Gerald Finley, Susan Bullock, Ann Murray, Barbara Bonney, Helmut Deutsch, Phillip Thomas, and Daniel Ferro. In October 2013, Jane participated in the Oxford Lieder Master Course led by Roger Vignoles.

For more details about Jane's performance experience, please download her Curriculum Vitae by clicking the link below.
​